They are the primary vector for transmitting Zika, Dengue fever, Chikungunya.

Nobody wants to be bitten by a mosquito, leaving a red spot on your skin. Mosquitoes are one of the insects that many individuals hate. Aside from the itchiness that they provide the moment they bite at you, they can also lead to harmful diseases such as dengue fever, malaria and more. It is actually a fantastic innovation when the marketplace has introduced mosquito repellent which you can use against the mosquitoes that are harmful. You have to get yourself a repellent if you like to go on outdoor trips. This product is equivalently important as other camping equipment such as sleeping bag, food, tent and others. However, there are people that tend to overlook this item and will result in them being unable to get a sound sleep because of the mosquitoes buzzing around them.

In the past decades, people used pesticides to get rid of other insects and mosquitoes. Well to be fair, insecticides do help to eliminate those pests that cause diseases, however, they contain toxins and chemicals which are harmful to the environment and your health too.

What is a Mosquito Repellent?

A mosquito or a bug repellent is a blend of ingredients/chemicals which can be put on the human skin, clothes or other surfaces that would prevent mosquitoes from sitting or crawling on that surface. Many mosquito repellents can be found on the market to protect you from mosquitoes and provide you with the duration of protection you require, according to your planned activity. Effective mosquito control can protect you from mosquito bites and save you from several mosquito borne diseases such as Dengue and Zika.

How Does Mosquito Repellent Singapore Work?

Most mosquito repellents evaporate on the skin and work by blocking a mosquito’s sense of smell, preventing it from finding its target. This is how substances like icaridine or diethyltoluamide (DEET for short) work. But while DEET is the most reliable insect repellent available at present, it isn’t thought of as entirely safe, particularly in high concentrations. Natural essential oils like citronella or tea-tree oil appear to cause fewer health issues have become a popular alternative. Repellents should be equally applied to all exposed areas of the skin to make it work well, as mosquitoes would readily detect the regions where repellent isn’t applied.

What Kinds of Ingredients Are Used

Ingredients used in mosquito repellents available today can be categorised into two different categories, namely synthetic substances and plant based compounds. Synthetic ingredients include DEET (diethyltoluamide), Picaridin (also referred to as Icaridin) and IR3535. Plant based repellent comprises of Citronella, Lemon Eucalyptus Oil and Geraniol. Various formulations of these repellents differ in the amount of active ingredient used (ingredients that actually affects the mosquito).

Permethrin: Repellents with this active ingredient are meant for use on items such shoes, clothing, camping equipment, bed nets etc.. They should not be used on skin.

Picaridin: It was developed in the 1990s, is as effective as DEET and has a much enjoyable scent compare to DEET. It’s mostly available in formulations ranging from less than 10 percent up to 20%.

Lemon Eucalyptus Oil: This is a natural, plant-based oil. It works as well at preventing mosquito bites

Citronella: Citronella oil is a common ingredient in plant-based mosquito repellents. It’s distilled from two species of grasses and is a mixture of about eighty different compounds. However, some users noted skin irritation, and one strain of citronella oil has caused allergies.

Geraniol: Is found in several plant oils, such as citronella, lemongrass, and oil of rose. In the 1990s, researchers identified Geraniol as “the best alternative to DEET.” Geraniol based natural mosquito repellent protects mosquito bites between two to four hours depending on the different species of mosquitoes. 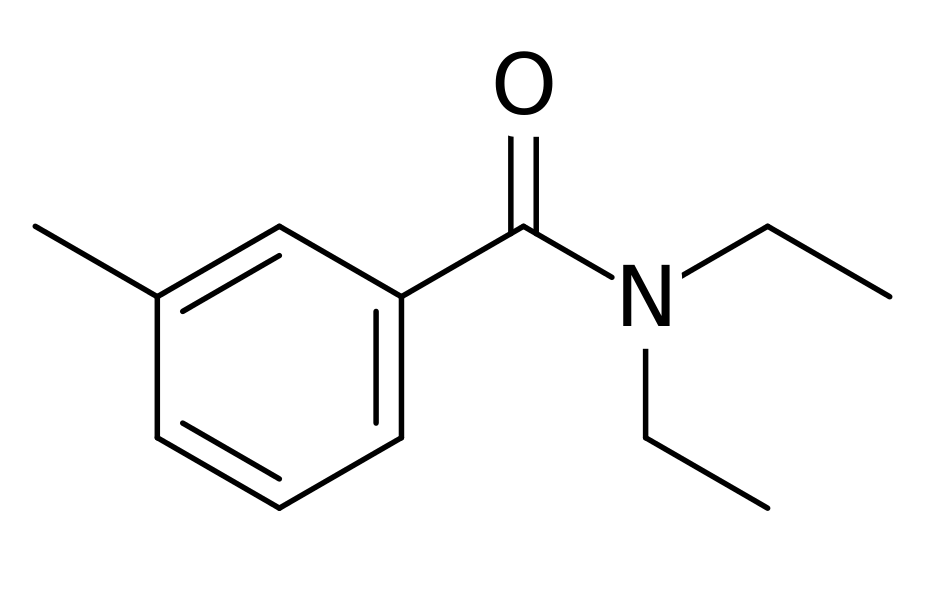 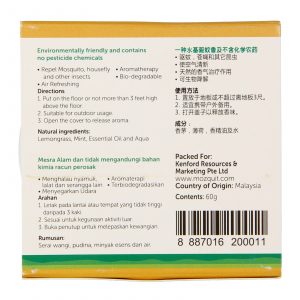 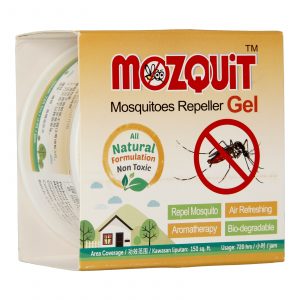 It’s all about enjoying the sun, getting out and about, and avoiding being nibbled by pesky bugs. The Mozquit Repeller Gel is powerful – encapsulating the surroundings with a fresh scent that makes bugs and mosquitoes buzzing away. Presented in a tub, this mosquito repellent gel is non-toxic, 100% natural, safe and acts like an air freshener.

Because of its ideal ingredients, this tub may be used during picnics camping, trips, days out and journeys. It is very different to those burning coils that emit fumes which contain substances like allethrin and formaldehyde, which can be harmful to our body.

Each tub will last for 4 weeks providing mosquito repelling and air refreshing scents to you. Don’t go anywhere without this mosquito repellent Singapore,it ought to be a part of your everyday while away from home. 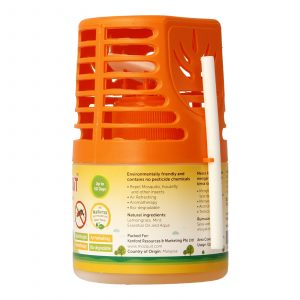 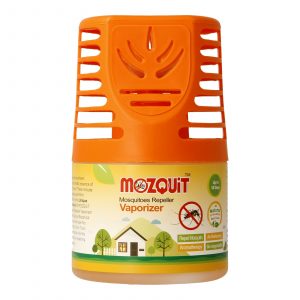 The mosquito repellent liquid vaporizer is a fantastic option to keep the mosquitoes away in comparison with the coils which emit smoke and cause uneasiness when inhaled.

Mozquit Repeller Vaporizer is a natural is an alternative to chemical based repellents. Made up of products out there in nature the ingredients is a blend of extracts from plants like lemongrass, eucalyptus, neem amongst others, and other oils.

Mosquitoes, even though their size is small, care must be taken in keeping them away from you as diseases can be spread by them. An all natural mosquito repellent that doesn’t cause any side effects is your best option.

This insect Vaporizer is offered in a 230 ml pack which is enough to last you for an estimated 60 days. The repellent is vaporised using an absorbent pad, therefore eliminating the need for electricity 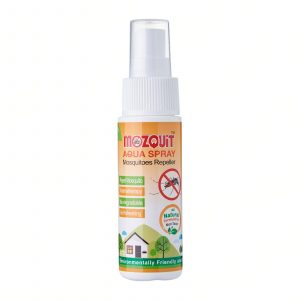 Mozquit Repeller Aqua Spray is an entirely organic & natural mosquito repellent Singapore. We only use pure essential oils to naturally keep insects, insects and mosquitoes away from you and your loved ones. Aqua Spray contains no DEET or synthetic chemicals, and has been independently laboratory tested for efficacy – therefore it is safe and effective for the entire family!

This 50ml bottle lasts for approximately 300 sprays and can be sprayed around the dark corners of the house, rooms, toilets, on schools bags & backpacks, potted plants. 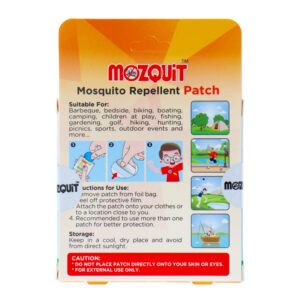 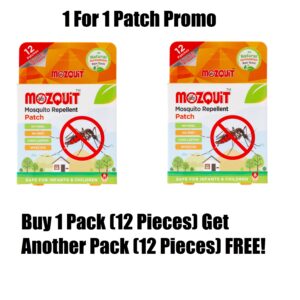 Mozquit Mosquito Repellent Patches are a safe, family-friendly alternative to repellent sprays. They are DEET-free and utilize a botanical formula to repel mosquitoes. The two active ingredients are Citronella and Eucalyptus oils.

Our unique botanical blend is gentle but effective in creating a scented barrier to repel mosquitoes. Mozquit Mosquito Repellent Patch contains 12 patches in each pack.

They are convenient for toddlers, hikers and outdoor recreationalists.

Simply stick an individually wrapped patch to your Clothes, Hats, Shoes, or Bags.

How To Apply Mosquito Repellents

How To Decide Which Mosquito Repellent Is Best

Prior to purchasing any insect repellent, read the label carefully to ascertain what the active ingredient is and it’s percentage since the protection duration varies depending upon the active ingredient and it is concentration. DEET is thought to be effective against mosquito bites, however, due to potential health issues, CDC added 2 more natural ingredient in 2005, Picaridin and Lemon-Eucalyptus Oil.

It ought to be noted that mosquito repellent Singapore don’t protect every individual alike. The efficacy of a repellent depends upon many things such mosquito species, sex, the level of activity and blood appeal of the human using the repellent. Here are some questions you can ask to decide which repellent is for you. 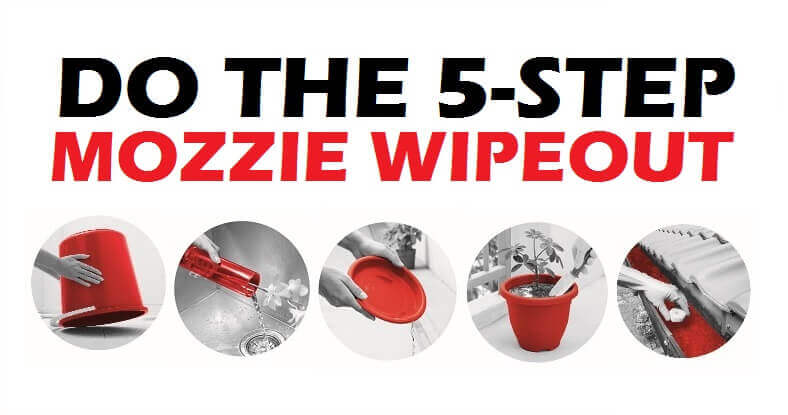